Shop New Arrivals | Free shipping on all U.S. orders over $100

Access Denied
IMPORTANT! If you’re a store owner, please make sure you have Customer accounts enabled in your Store Admin, as you have customer based locks set up with EasyLockdown app. Enable Customer Accounts
Facebook Pinterest Twitter **THIS ITEM IS A PRE-ORDER, EXPECTED TO SHIP THE WEEK OF FEBRUARY 6TH, 2023. UNLESS OTHERWISE NOTED, ANY ORDER THAT CONTAINS A PRE-ORDER OR BACKORDERED ITEM WILL NOT SHIP UNTIL ALL ITEMS ARE AVAILABLE**

Look here, look there, look everywhere! See who you can spot in this wimmelbook-style jigsaw puzzle featuring Rhett, Link, and many more.

Please, submit any question you may have below. Our support team will check your message and forward it to the best person to help. We'll get back to you within one to two business days.

As a friendly reminder, questions submitted on either Friday evening, Saturday, or Sunday will not be reviewed until the next business day.

We accept returns on new and unused items. If you received the wrong item or a defective product, we will send a replacement item free of charge.

Returns (free of defect/error):
*you are welcome to return your new, unworn/unwashed item for a refund.  Refunds will be made to the original method of payment, and do NOT include the original shipping charge.  Your refund is not subject to processing fees on the customers behalf.

When purchasing a return label, please, ensure that there is tracking included. Mythical is not responsible for any items that are lost in transit returning to our warehouse.

*Please contact us below if you want to process a return within 30 days upon receipt/confirmation of delivery of the order. Returns beyond 30 days of receipt will not be accepted.

Such a fun puzzle! I loved finding all the silly little references, was smiling the whole time I worked on it. 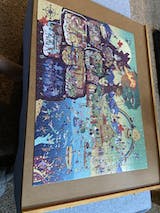 Okay, let me just start out by saying that I generally suck at puzzles. I've completed likely less than ten in my entire life, so that's about two a decade. When I saw this one, I knew I wanted it, but the reality is, I figured it was gonna be an absolute nightmare to solve, what with the Where's Waldo-ish nature of it.

BUT IT WASN'T!!! This puzzle was probably the easiest one I've ever solved! I did it in about five hours total, (spread throughout an evening and the next morning.) I really hope they release more puzzles that have so much . . . put-togetherness-ability, like this one does.

Also, I loved how they got David Hill in there. That gave me a laugh when I figured it out, (way after I should have realized the joke.)

Very high-quality puzzle—thick cardboard with a nice matte finish. Middle of the road challenge level—expert puzzlers like myself wont breeze through it, but it isnt too hard for novice puzzlers. And, lots of gmm easter eggs for fans of the show!

The quality of the puzzle is great and the design is so much fun. It's challenging without being frustrating. I'd buy a new puzzle each year if they made it an annual thing.

This puzzle is awesome! It was so fun to see all the references to everything Mythical. I especially loved Charles' "Belch Life" golf cart and David Hill's face in the hillside. I just wish it was 1000 pieces instead of 500. Mythical, please make more puzzles!